When it comes to documentation aimed at developers, there’s a spectrum. On one end, there’s zero documentation, only code. On the other end of the spectrum, are literate programs; the code is intertwined with the documentation and the language is equally geared towards marking up a document and translating ideas into machine executable code.

Somewhere along this spectrum exists a happy ideal for most programmers. Inline API docs ala JavaDoc, RDoc, and YARD have been popular for a while. Lately, tools like docco and rocco have raised enthusiasm for “semi-literate programming”. There’s also a lot of potential in projects exhaustively documenting themselves in their Cucumber features as vcr does.

All of these tools couple code with documentation, per the notion that putting them right next to each other makes it more likely documentation gets updated in sync with the code. The downside to this approach is that code gets ‘noised up’ with comments. Often this is a fair trade, but it occasionally makes navigating a file cumbersome.

It happens that Unix, in its age-old sage ways, has been storing its docs out-of-line with the relevant code for years. They’re called manpages, and they mostly don’t suck. Every C API on a modern Unix has a corresponding manpage that describes the relevant functions and structures, how to use it, and any bugs that may exist. They’re actually a pretty good source of info.

It so happens that Ryan Tomayko is a Unix afficionado and wrote a tool that is even better for writing manpages than the original Unix tooling. It’s called ronn, and it’s pretty rad; you write Markdown, and you get bonafide UNIX manpages plus manpage-styled HTML.

Perhaps this is a useful way to write programmer-focused docs. Keep docs out of the code, put it in manpages instead, push it to GitHub pages. Code stays focused, docs still look great.

I took John Nunemaker’s scam gem and put this idea to the test. Here’s what the manpage looks like, with the default styling provided by ronn: 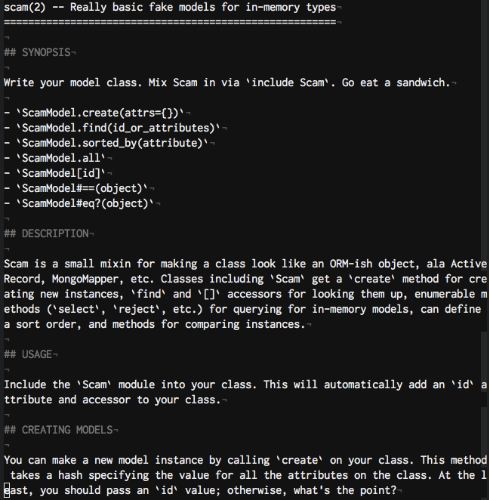 No Ruby files were harmed in the making of this documentation.

It took me about ninety minutes to put this together. Probably 33-50% of that time was simply tinkering with ronn and making sure I was writing in the style that is typical of manpages. So we’re talking about forty-five minutes to document a mixin with seven methods. For pretty good looking output and simple tooling, that’s a very modest investment.

The potential drawbacks are the same as any kind of documentation; it could fall out-of-sync with the production code. Really, I think this is more of a workflow issue. Ideally, every commit or merged branch is reviewed to make sure that relevant docs are updated. As a baseline, the release workflow for a project should include a step to make sure docs are up-to-date.

In short, I have one datapoint that tells me that ronn is a pretty great way to generate programmer-oriented documentation. I’ll keep tinkering with it and encourage other developers to do the same.

← How to make a CIA spy, and other anecdotes
→ Bootstrap, subproject, and document your way to a bigger team