A few weeks ago, Dan Cederholm, of Simple Bits fame, launched Foamee. Foamee lets you track who you owe beers to. The twist? You manage your beer debt via Twitter. Its a small little app. It only does one thing. Its got a fantastic entry-point. In other words, its really cool.

Erik Kastner reminded me of his app Band Named this week. It finally clicked why its cool this time. Games like Guitar Hero III and Rock Band want you to name your ethereal band. Band Named is a great place to post ideas for said names. The neat thing about Erik’s app is that you can sign in via OpenID (+1) and then fetch your avatar from Flickr or Twitter (FTW). The entry of new band names is easy. And its fun!

I hope this turns into a trend-buzz-meme thing. The world needs more apps that aim to just help you out now and then, not ones that want to become your task management, knowledge capture workflow mega-gizmo-jobby. Better yet, apps that are loosely coupled via infrastructure you’re already using (Flickr, Twitter, OpenID, etc.) taste great.

Plus, these little efforts needn’t result in all-pain, no gain. Dan probably can’t support himself on it, but I bet any money made from Foamee merch will come in handy. Likewise, there are lots of things you could do with something like Band Named, though I don’t know if Erik’s going to take it that direction. 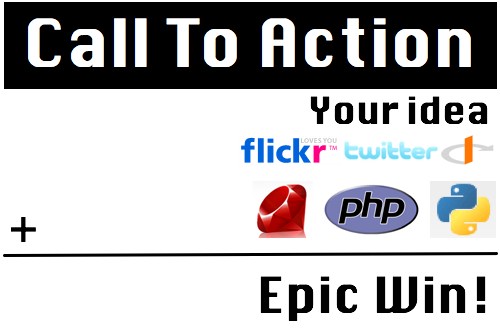 So, call to action: hatch up some idea. Make sure its a little crazy. If pitching it to a VC would get you laughed out of the room, you’re on the right track. If you think the commenters on TechCrunch would skewer you, you’re getting even warmer. Think Uncov would just laugh and point? You’ve probably hit the jackpot. Now: go out, build the sucker and figure out how to have fun with it.

I’ll leave you with this: its all about getting to the point where you’re making dough and having fun.

Telling a joke. Typing. View all posts by Adam Keys

7 thoughts on “The rise of the micro-app”